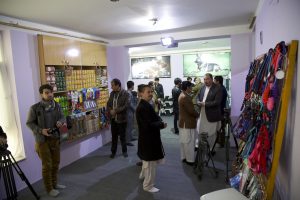 A new and standard service center for the German Shepherd dogs was inaugurated in Kabul city today amid rising popularity among the city residents to keep dog pets.

Officials from the Ministry of Agriculture, Livestock, and Irrigation as well as the private sector entrepreneurs were present during the inauguration ceremony of the Club.

According to the Club owners, the center will be used to provide full range of services related to the German Shepherd dogs, including breeding, care taking, and training of the dogs.

The officials further added that the center will also be used to provide health services to the dogs as well as the required equipment and foods.

Other services such as the chipping of the dogs will also be provided by the center in a bid to help track the missing as the officials of the Club are saying that the chipping will be one of the main services of the center.

The owners of the Club are also saying that the center will operate in breeding and training the German Shepherd dogs to be supplied to the security institutions, ministries, and other key government institutions, including the ARG Palace.

A trainer of the German Shepherd dogs Baz Mohammad Nezami said the dogs will be fully trained over a period of 18 months and can be used in detecting mines, bodies, explosives as well as providing security.

The animal health sector deputy in the ministry of agriculture, irrigation, and livestock Ahmad Mukhtar Mohsini welcomed the inauguration of the Club and said the major issues pertaining the German Shepherd dogs breeding and training will be resolved with the opening of the Club and will create job opportunities.