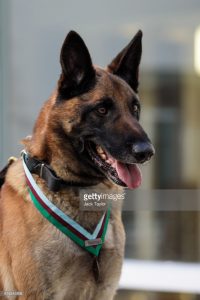 A military dog injured in Afghanistan in 2012 has been awarded the animal equivalent of the Victoria Cross medal for bravery.

He received the Dickin Medal on Friday and his handler from that time also got a medal.

After a grenade injured his chest, legs and an ear, Mali finished his mission before returning home for treatment.

He is the 69th recipient of the medal, which has been awarded to 31 other dogs, 32 World War messenger pigeons, four horses and one cat.

He is now retired from frontline duties and has made a full recovery.

Jan McLoughlin, director general of the PDSA, the veterinary charity that awards the medal, said: “Mali has displayed a truly awesome ability and determination to seek out explosives and insurgents during a key operation.

“To achieve this while exposed to close combat and such intense enemy attack makes him an incredibly worthy recipient of the PDSA Dickin Medal.”

His current handler, Corporal Daniel Hatley, who also trained him as a puppy before he was deployed to Afghanistan, said: “I am extremely proud of Mali. The way he conducted himself when it mattered most enabled my colleagues to achieve success in close combat.”

His handler during his time in Afghanistan cannot be named for security reasons but was awarded a gallantry medal for his part in the mission in which Mali sustained his injuries.